You may not think of fire preparation as a way of keeping intruders out of your home, but last week’s pointless Daylight Saving Time shift reminded me that it is an essential part of keeping your home safe.

A lot of people think of fire alarms as their first line of defense against home fires, and that is not strictly a bad position to take, but it is incomplete.  In reality, one of the first things you can do to prevent fires is simple care and maintenance of your house.  Ensure your circuit breakers are in good condition, and test them (if possible – not all have test switches).  Test your GFCI outlets (those do have test buttons).  Keep your chimney / flue / furnace exhaust / etc. clean and clear of debris, plant growth, and whatever else.  Be careful cooking in general and frying especially.  If you use space heaters, keep them away from flammable things and ensure their tilt sensors work.  If you smoke, try not to smoke in your bedroom, and always use an ash tray.  Never use frayed or damaged electrical cables or cords.  Try not to overload your outlets with multiple high-draw items.  Never grill inside.  During Christmas-time, check your lights and keep your tree away from heat sources, even artificial trees.  Keep your dryer lint catcher clean and check the exhaust vent periodically.

A lot of these are little things that you may already be doing, but they are good habits none the less – for example, a clear dryer lint screen will allow the machine to be more efficient.

The simple answer to “Should I use ionization or photoelectric smoke detection?” is “Yes.”  Dual-sensor smoke detectors are not appreciably more expensive than single-mode, and given that each sensor type detects a different kind of fire, the added peace-of-mind is worth it.

As for wired versus standalone units, the real questions are, “What does your house have presently?” and, “Can you get into the space above the ceiling easily?”  Basically, if you already have wired smoke alarms, keep using them – that way, when one starts sounding, they will all sound, ensuring everyone can hear.  If you have standalone units presently, and can easily access the reverse of the ceiling in all locations you would have a smoke alarm (for instance, if you own a ranch house), it is entirely possible to easily retrofit wired smoke detectors.  If you own a two-story home, however, running the wiring would require cutting a lot of drywall, so you will have to decide what it is worth. 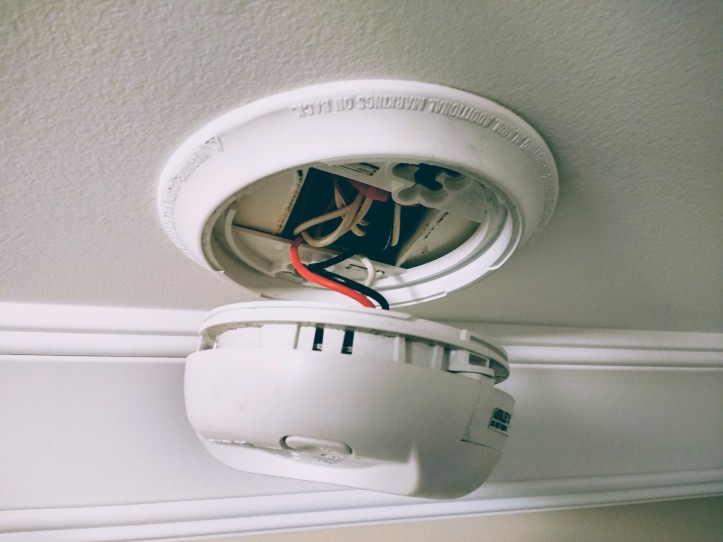 Alternatively, both First Alert and Kiddie offer wireless smoke alarms that talk to one another on their own frequency, allowing universal alarming if one of them detects something.  Nest has something similar, but it is an Internet-of-Things device, with all of the potential security flaws thereof, and only relies on a photoelectric sensor, though one designed to make up for the standard shortcomings of that technology.

On the topic of sensors, however, if you have a natural gas appliance in the house, I strongly recommend carbon monoxide sensors.  CO is nasty, nasty stuff, and pretty much the only reliable way to detect it is appropriate senors; you can buy smoke detectors with CO sensors built into them, or you can go with standalone units, but have one at least on every floor there is a flame source.

Ok, so now we have a way to know if there is a fire in the house; what should  you do if it actually alarms?  As a general rule, call 911 and evacuate.  House fires can get ridiculously out of control ridiculously fast, and there is a reason firefighters train to handle them.  In that vein, ensure that your family has an evacuation plan and practices it regularly – what are you going to grab on the way out, where are you going to meet when you get out, how are you going to get out if certain routes are compromised, so on, so forth.  Escape ladders are strongly recommended if you live in a multi-story structure, and keeping off-site backups will minimize the loss to your family.

Also, any cell phone – with service or not – can call 911, so keeping an old flip-phone in your bedroom plugged into a timer will guarantee that you will always have at least one phone handy in the case of emergencies.

If, and only if, you have had proper training in fire-fighting, I would recommend keeping an extinguisher on each level of the house, and another in the garage.  Kiddie makes a handy unit that weighs in at all of four pounds, is ABC-rated, and can be tucked pretty much anywhere.  And, at that size, you will not be tempted to try to fight a fire that you probably should not be fighting.

House fires are thankfully becoming less common, and are far less frequent than burglaries (365,500 fires versus 1,579,527 burglaries in 2015), but they can be even more destructive, and, really, preparations against them are neither hard nor expensive.

(Though I have had extensive fire-fighting training in the Navy, I am not a firefighter nor a fire professional.  Any advice dispensed here should not be considered official nor legally binding, and the legally-correct answer to a house fire is “let the professionals handle it”.  I am not responsible for any other choices you make.)